Five years ago I read W.H. Auden’s Christmas oratorio, For the Time Being, for the first time. I’ve found myself drawn to it during Advent every year since. His psychological insights into the players that populate the narrative breathe life into a story that often feels too familiar to fully appreciate. But it’s his meditation on the paradox central to the event that keeps me coming back. How could God—infinite, uncreated, free of the constraints of time and place—be born one night in a village in Palestine?

How could the One with no beginning and no end have a birth tied to a date on a calendar? How is it possible the arrival of the One that changed everything, seems most days to have changed nothing?

Freedom from the “turbine of time”

Auden composed the poem between 1940 and 1941, just as America was on the brink of being drawn into the second World War even though wounds inflicted during the first global conflict were barely healed. Surely he was weary of war, just as we are weary of headlines of terror and violence that dominate headlines week after week. He must have been frustrated that history seems destined to repeat itself, that conflict seems cyclical and that we seem incapable of freeing ourselves from “the turbine of time.” And that’s why Christ’s birth matters to Auden, because within it is the hope of freedom from the unhealthy cycles that bind us.

One of Auden’s central concerns throughout the poem is exploring how Christ’s birth as a unique historical event occasions a shift from a cyclical understanding of time in which history is destined to repeat itself to an understanding of time where past, present and future are clearly delineated, where individual decisions can change history’s course, where an event in the distant past can speak powerfully into our present.

There are two ways of thinking of time—either history inevitably repeats itself, locking events into an established cycle where “time turns round itself in an obedient circle” or history is made up of ordered times, of a series of generations, of a string of events that are being directed toward a climax. Only the second view allows for the possibility of an unexpected, unique temporal event.

In For the Time Being Auden ushers us into a world comfortable with cyclical time, but hovering nervously on the threshold of an unprecedented event. The dread coalesces around one question, “How could the Eternal do a temporal act, The Infinite become a finite fact?” The question is rhetorical, underscoring the impossibility of the event at the heart of the poem, and is followed with a demand for a miracle. The shepherds and wise men are on the scene at the manger when the miraculous occurs and their thoughts, like those of the narrator and chorus, turn to time,

Shepherds: Our sullen wish to go back to the womb,

Wise Men: To have no past.

The shepherds and wise men perceive, in Jaroslav Pelikan’s words, “…the clinching argument against the theory of cycles in history was the life and person of Jesus Christ.” Looking at the Child now, there can only be before and after.

Drawing the past into the present

Although Auden rejects a cyclical view of history, his perspective on the sort of time Christ’s birth inaugurates is more nuanced than a simple linear view. Certainly Auden delineates past, present and future, but he constantly challenges our understanding of where we stand relative to this event by bringing the past into our present and our present into the past. Miriam Starkman explains that Auden achieves “the simultaneity of beginning and end ontologically” by a system of “telescopic anachronism…by which time past and present were made to ride in tandem.” So, for instance, Joseph observes, “My shoes were shined, my pants were / cleaned and pressed,” the wise men opine, “that we want our dinners, /And miss our wives, our books, our dogs,” Herod brags, “Soft drinks and sandwiches may be had in the inns at reasonable prices.” We may justifiably ask, which time are we in—past or present, first-century Palestine or early 20th century New York?

Anachronism reinforces the message that these events have import for our modern lives, that the incarnation confronts us in the present despite chronological distance. Tom Driver observes that Auden’s way of contemporizing biblical events is not just Christian, but is distinctly Protestant,

Historically oriented as it is, the Bible never allows past events to remain simply in the past. It draws them into the present. Its way is Vergegenwartigung—a making present. In the biblical view we see a historical event in its own past time and yet we see it taking place again in the present. Auden preserves this view; here is one reason for calling him Protestant. In Catholicism, the Mass becomes a new sacrifice each time it occurs. In Protestantism, Holy Communion is a superimposition of a past moment in time squarely on top of the present. There is no new sacrifice; there is the once-for-all sacrifice present again.

Time as a choice of how to love

No actor in Auden’s oratorio more fully expresses the significance of Christ’s birth than Simeon. Miriam Starkman calls Simeon’s Meditation “the doctrinal heart of the poem.” Both by its form and its content it brings to light Auden’s understanding of history.

Simeon’s meditation is divided into 13 speeches of discursive prose that clearly delineate between past, present and future—the first six speeches reflect on what was past, the middle two focus explicitly on the present moment, and the final five spell out the consequences of the now for the future. Simeon’s thoughts on the meaning of the Word made Flesh in the present moment—now—directly respond to the existential angst that characterized the Advent,

But here and now the Word which is implicit in the Beginning and in the End is become immediately explicit, and that which hitherto we could only passively fear as the incomprehensible I AM, henceforth we may actively love with comprehension that THOU ART.

In response, the chorus affirms that their fear is assuaged, “Now and forever, we are not alone.” Simeon’s last five speeches confidently declare the changes irrevocably wrought “because of His visitation”—We were alone, but now God is among us; we were hopelessly lost, but now we have hope of redemption.

While Auden clearly believes that Christ’s birth makes possible a new way of being in time, he does not believe that all people will choose to live in it. Some may, in fact, prefer to return to well-worn paths. Simeon states,

Auden perceived that the course of the world’s History (capital H) is ultimately determined by the collective personal history of individuals and, specifically, by the quality of their relationships. It is this dynamic relationship between global History and personal history that leads Edward Callan to argue that For the Time Being is unique in nativity drama. Auden attempts, he says, “to draw an analogy between the transformation wrought in history by the incarnation and the transformation required in individual lives faced…with the reality of the incarnation.” The shepherds and wise men become our surrogates around the manger, embodying the experience of meeting Jesus in the flesh. They fully comprehend the magnitude of the moment:

Third Shepherd:
Tonight for the first time the prison gates
Have opened.

Third Shepherd: And swept the filth of habit from our hearts.
The Three Shepherds: O here and now our endless journey starts.

There is a breathless excitement in these succinct lines. As the men peer into the Child’s face the nature of their choice crystallizes, “Time is our choice of How to love and Why.” Callan characterizes Auden’s understanding of history as “Christian existentialist,” and to the extent that Auden challenges each individual to consider how her encounter with “Living Love” will affect her understanding of who she is and how she is meant to live in the world, I believe he’s right. 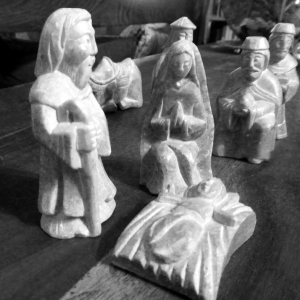 We must now say a word about Auden’s choice of title, one of the strongest indicators that history was foremost among his concerns. For the Time Being locates us in time between times, as if Auden has placed us forever in the Advent. The title seems in tension with the poem’s message that history turns on this unique event. If the miraculous moment has occurred, why are we still waiting? The narrator’s final speech alludes to the title,

But, for the time being, here we all are,
Back in the moderate Aristotelian city
Of darning and the Eight-Fifteen, where Euclid’s geometry
And Newton’s mechanics would account for our experience
And the kitchen table exists because I scrub it.

Auden recognizes that all of us are drawn back into the cyclical rhythms of life in which history is as predictable as “the Eight-Fifteen.” Even the unique event of Christ’s birth has become part of a liturgical cycle that repeats year after year—the undercurrent pulling us back into the “turbine of history” is strong indeed.

But the narrator continues,

To those who have seen
The Child, however dimly, however incredulously
The Time Being is, in a sense, the most trying time of all.

Despite appearances, something has definitively changed—before we relaxed into the re-occurrence of events, but now we have an urge to escape the cycle. Our frustration with the status quo is a direct consequence of our encounter with Christ. We can no longer be satisfied with an existence shackled by predictable patterns, in which we “Have walked a thousand miles yet only worn/ The grass between our work and home away.” After seeing Christ, we long to strike out on “the Pilgrim Way.” We yearn to move forward, even if that motion takes us with Jesus through the apocalyptic “night of agony still to come.”

The final chorus is an invitation to follow, to seek, to love, to live in a history that is moving toward a destination. By following the Way, “you will see rare beasts, and have unique adventures.” By seeking him in the “Kingdom of Anxiety; / You will come to a city that has expected your return for years.” This is nothing if not a future to long for even as we muddle through the time being. 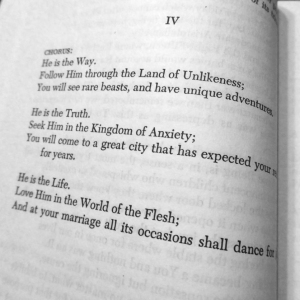 This post is an adaptation of a paper I wrote for Maxine Hancock’s class on Jesus in Literature, a course that is still available through Regent College in Vancouver.

The form and the content of the last five of Simeon’s speeches unmistakably echo the Christological hymn of Colossians 1:13–20, in which the phrase, “in Him” becomes a refrain. The influence of Kierkegaard, Niebuhr and Freud on Auden has been well documented, but little (if anything) has been said about the importance of Paul’s theology for Auden. I wish someone would take the time to write a dissertation on the topic!

The following work informed my reading of the poem:

Brian Conniff. “What Really Became of Wystan? Auden, Niebuhr, and For the Time Being,” Christianity and Literature, 44 No 2 (Winter 1995): 133–141.
(This article discusses the circumstances surrounding the composition of the poem, including Auden’s conversion to Christianity, his emigration to America, and his friendship with the Niebuhrs.)

Pelikan, Jaroslav. Jesus Through the Centuries: His Place in the History of Culture. New Haven: Yale University Press, 1985.

5 replies to For the Time Being: Thoughts on Auden’s Christmas Oratorio