Victims of a shipwreck—that phrase stuck with me.

It’s a description I’ve been thinking about a lot over the last few weeks as a friend’s long struggle with ovarian cancer nears its end.

I read the words last spring on the wall of the Pera Museum in Istanbul one morning when my husband and I were enjoying a rare day out in the city together.

Victims of a shipwreck—that’s the way a June 6, 1965 edition of the New York Times Magazine described the figures in Giacometti’s work.

We had come to see an exhibit of Giacometti’s sculptures and paintings, especially his portraits. The gallery was nearly empty, so we lingered in the quiet, still in front of his marvelous bronze figures and monochrome paintings.

I wondered then and I have wondered since: Are these figures being whittled down or built up? Are they tortured or indomitable? Are they disintegrating or are they emerging? Are they victims or are they survivors?

For decades the preferred reading of these works was that they embodied an existentialist vision. Giacometti’s style, it was said, “summed up the philosophy’s interests in perception, alienation and anxiety.” His sculpture and painting captured the sense of melancholy, loneliness and despair that lingered in the modern mind after the devastation of two world wars and the trauma of the Holocaust.

Giacometti, it was said, “is the Jean-Paul Sartre of sculpture.” His art was seen as “an agonized meditation on the artist’s struggle to give form to fleeting perceptions and as the desperate efforts of the isolated if not alienated individual struggling to make a place for himself or herself in an indifferent if not hostile world.”

Standing before Grand femme debout I (1960), I see a woman who is emaciated; but she is poised. She may be stretched thin; but she stands with dignity. She is resolved, enduring, unbroken. I don’t see a victim; I see a survivor.

Lately art critics and historians, too, have begun to reassess the meaning of Giacometti’s work. There is a dawning awareness that in an era dominated by abstraction, Giacometti didn’t abandon the human form. In that sense, “the real story of Giacometti’s work is an assertion of humanity.”

“But look at the work and you sense he must have meant something else. Figures in groups, isolated figures, portrait heads: they are always enthrallingly handled, their surfaces still bearing the subtle impression of Giacometti’s fingers, as mutable as human faces that may change the next moment.”

Giacometti’s figures are not adrift and abandoned—victims of a shipwreck—they have been “enthrallingly handled.” I love this phrase. It’s exactly right. The sculptures have been shaped, molded, crafted. The artist has left his touch all over them.

Atheistic existentialism asserts unapologetically that we are not made, that we make ourselves by an exercise of the will. Man, says Jean-Paul Sartre, “is nothing else but what he makes of himself.” But when I look at Giacometti’s sculptures, I see the fingerprints of the artist everywhere. On the surface of his paintings, a flurry of brushstrokes testify to the hand of an artist working persistently to articulate the contours of presence. These works have been “enthrallingly handled.” They have been loved into existence. 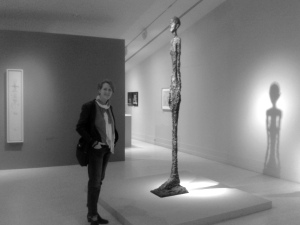 Even if the gallery is empty these sculptures aren’t alone; they relate to one another. The variation in scale, the orientation of their direction, all speak to the complexities of human dynamics.

It is the relational aspect of these works that makes me think of my friend. On one hand, her battle with cancer is entirely hers—she alone feels the pain of the disease from the inside out. But on the other hand, she’s never been all alone. She’s experienced this journey in the company of God. And she is surrounded by family and friends, by an entire community that she has loved and that loves her in return. She hasn’t been alone in the past; she’s not alone in the present and she won’t be alone in the future.

Her hope in resurrection means that the community she is experiencing now transcends the physical reality of this world. Even when the body erodes entirely, her personhood is not annihilated because life in Christ isn’t bound by the grave.

Robert Storr observes that a kind of “atmospheric erosion eats away at the contours and features of all of Giacometti’s sculptures.”

He’s right. The surfaces are scarred. Some so much so that it seems they will ultimately dissolve entirely.

Even those of us who haven’t been diagnosed with a terminal disease feel the “atmospheric erosion” as an aspect of human existence as we age. I know I do. I look in the mirror and I see immediately that my 40-year-old self is nothing like my 30-year-old self. I am physically eroding in some disconcerting ways, but I am more than the face that I see in the mirror.

Paul expressed this aspect of existence so perfectly in his second letter to the Corinthian church:

My deepest desire for my friend is that her inner self will be renewed day by day. My prayer is that she will wake up each morning feeling the approach of the eternal weight of glory. That the things not seen—the things which are eternal—will come into sharper focus.

I’ve seen my friend twice since she was diagnosed with cancer two and a half years ago—once in Istanbul when she was in remission, and once in the foothills of the Blue Ridge. On both occasions I was struck by her joy. Her confidence was anchored in her unshakable faith that the Lord sustains her and holds her in his hands. Her endurance and resolve in the face of suffering reflected her vision that extends beyond momentary affliction.

When I see Giacometti’s sculptures I don’t see anxiety, I see dignity. I don’t see alienation; I see presence. I don’t see frailty; I see endurance and resolve. I don’t see victims; I see survivors. These figures aren’t broken; in fact, they’re striking in their poise.

It’s this poise that reminds me so much of my friend. She isn’t wasting away; she’s being built up. Her spirit isn’t eroding; it’s being renewed day by day. Perhaps her body is becoming less substantial, but her soul is becoming more so. Even as her physical presence is whittled down, she becomes more radiant. Looking at my friend, I’ve never seen despair, but I’ve glimpsed the eternal weight of glory.

My friend is not the victim of a shipwreck; she’s a survivor because she’s been rescued. She’s walked through the fire and the deluge with the One who walked through death itself and emerged on the other side alive, renewed, resurrected.

In his imaginative portrayal of heaven, The Great Divorce, C.S. Lewis describes a woman—a gloriously radiant woman—whose presence scatters light in every direction:

“Every beast and bird that came near her had its place in her love. In her they became themselves. And now the abundance of life she has in Christ and the Father flows over into them.”

The abundance of life in Christ flows out of my friend’s presence. Everything about her—her smile, her manner, her kindness, her hospitality, her concern for others—communicates her experience of abundant life and her deep desire for others to live in that abundance.

“Love shone not only from her face but from her limbs,” says Lewis, “as if it were some liquid in which she had just been bathing.”

It may not be long before my friend awakens to the face of living Love. When she does, I know she will be seen and known and welcomed home.

5 replies to Victim or Survivor?—Giacometti, ovarian cancer, and a glimpse of glory