“The last word of the Old Testament is ‘curse’ (Mal. 4:6), and it is meaningful that the opening sermon of our Lord’s ministry commences with the word ‘Blessed.’”
—Charles Spurgeon

“What have you got in here?” I ask my son, slinging his backpack over my shoulder. “Did you fill your bag with rocks?”

He’s complaining the bag is too heavy to carry, so I lug it up the hill home.

Dropping the bag inside the front door, I unzip it and pull out a stone the size of my hand. It’s painted dark blue, with the image of a bright blue eye in the middle. It’s a nazar boncuk, a charm to protect from the curse of the evil eye.

Nazar boncuk are everywhere in Turkey. I see them painted on the backs of minibuses, hanging over doorways, woven into entry rugs, incorporated into jewelry, painted on ceramics. I’ve had kind, concerned women pin them on my kids in the bazaar. A dear friend knit a gorgeous blue sweater for my daughter—every button was a nazar boncuk. 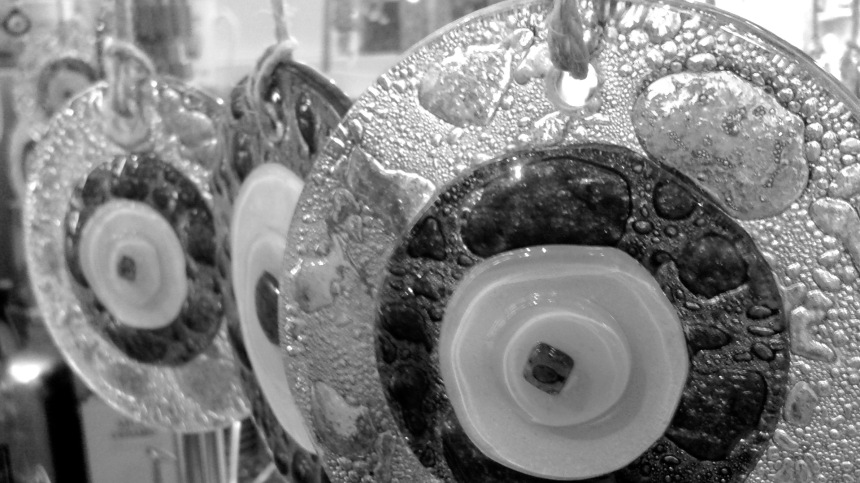 I’ve always appreciated the sentiment behind these gifts. They communicate care. The people who give nazar boncuk want us to be protected; they want us to be safe. Nazar boncuk are given with love, but behind them is fear—fear of curse, fear of disaster.

Encountering Curse in the Bible

Because I grew up in a western, secularized culture, I didn’t grow up with a fear of curse. Curses were woven into the fabric of fairy tales, not real life.

It took living in a different culture where some take curses seriously to make me notice that the language of curse and blessing are part of the fabric of the Biblical story. Now I don’t skim past references to them the way I used to.

I’ve been reading a collection of Charles Spurgeon’s sermons on the Sermon on the Mount. If there was ever a preaching prodigy, it was Charles Spurgeon. He preached his first sermon when he was only fifteen-years-old. Four years later he was called to be the pastor of London’s New Park Street Chapel, when he was only nineteen. His sermons drew such enormous crowds that the church later scrambled to find a bigger venue, ending up gathering in the Surrey Music Hall.

Spurgeon has been crowned the “Prince of Preachers,” but if he were to hear that term applied to himself, he would almost surely blush because it was a title he first gave to Jesus in one of the sermons I’m currently reading.

Spurgeon comments that the last word of the Old Testament is curse, and so it is significant to him that the first word Jesus speaks in the sermon that inaugurates his public ministry is “blessed.”

I underline this passage, make a note in the margin; then I sit back and wonder: Can curse really be the last word? What an unsettling thought.

I put down Spurgeon and turn to Malachi.

I read the last verse of the last chapter:

“A decree of utter destruction” is the way the ESV, NIV and several other modern translations render the Hebrew for curse; but some translations like the NASB and the 1599 Geneva Bible retain the actual word:

“lest I come and smite the earth with cursing.” 1599 Geneva Bible

“so that I will not come and smite the land with a curse.” NASB

Smite is one of those words that’s hard to say out loud without sounding sarcastic. But the threat of judgment here is serious. Curse looms in the air like a thundercloud between the Old and New Testaments.

Blessing or Curse: Which Gets the Last Word?

I need some help to get to the bottom of the meaning here, so I look to see what the prolific Bible commentator James Montgomery Boice has to say about this passage.

Boice acknowledges that this verse presents a problem. He explains that curse as the last word of the Old Testament so bothered Greek translators of the Septuagint (the Greek translation of Hebrew scripture) that they reversed the last two verses of Malachi to ensure that the book would end with blessing rather than curse.

The Masoretes—Hebrew scribes—were also troubled by the ending of the book, but rather than reversing the final verses, they repeated the next-to-the-last verse of Malachi after the last verse. The effect was the same: blessing got the last word.

But the root problem was unresolved because no clever reordering of words could neutralize the threat of curse. The conclusion of Malachi reinforces the reality that God will judge those who don’t serve Him faithfully by keeping the Law.

But Malachi isn’t the last word.

I think of Revelation 22, the last chapter of the last book of the New Testament. I decide to read the last chapters of Malachi and Revelation side-by-side. There is warning and hopeful promise woven through both chapters; but in Revelation, blessing gets the last word.

In the last chapter of Revelation, John introduces us to a vision of a world “where there will no longer be any curse.” (Rev 22:3)

How Jesus Changes Curse into Blessing

Between Malachi and Revelation, the transition from curse to blessing is made possible by one stunning arrival—the Lamb of God, the one John the Baptist announces, “takes away the sin of the world!” (John 1:29).

The arrival of Jesus on the scene changes everything.

The Apostle Paul explains in the letter to the Galatians that “Christ redeemed us from the curse of the law by becoming a curse for us….so that in Christ Jesus the blessing of Abraham might come to the Gentiles, so that we might receive the promised Spirit through faith.” (Galatians 3:8)

Breathe that in: in Christ God’s blessing falls on us. In Christ we are free from the curse of the law, sin and death. In Christ we become part of the family of faith. In Christ we can be filled with the Spirit. In Christ there is no reason to ever fear curse.

Glancing back to Malachi, I can see that even then, there was already a glimmer of hope. Although the very last word of Malachi is curse, there is a promise embedded into the last chapter that’s like the breaking of dawn after a long, frigid night:

“But for you who fear my name, the sun of righteousness shall rise with healing in its wings” (4:2)

The healing Malachi envisions reemerges in Revelation where the leaves of the tree of life, “were for the healing of the nations.”

The last chapter of Revelation is a visualization of what a world healed, restored, reborn and blessed will look like—it’s a chapter flooded with a river of living water and with light that never dims.

The very last words of the Bible, Revelation 22:21, are a blessing:

“The grace of the Lord Jesus be with all. Amen.”

Grace. The grace of the Lord Jesus. Grace to you all. May it be.

At the end of the day, blessing—not curse—is the last word.

7 replies to From Curse to Blessing: How grace gets the last word