Imagine life as a loom. The lengths of string composing the warp are pulled taught, stretched out like so many days, months, and years—a suspended vertical calendar. And making up the weft are threads of varying color and texture mingling in a sometimes chaotic and sometimes beautiful way. Each thread represents the presence of a life.

I have a friend who’s a weaver. Her name is Leah. She came into my life a little less than two years ago in the wake of a season that had been marked by loss and change. I was so disoriented from a world that had been spinning too fast that I needed a moment to step out of the momentum and be still. So I invited her to retreat with me to an island near the city where the seaside is lined with fish restaurants, the hills are crowned with pine forests, bougainvillea climbs up the side of summer homes, and no one’s in much of a hurry to get anywhere.

One morning after a breakfast of eggs, tomatoes, olives and crusty bread, we sat on the tiny open-air patio behind the little apartment we rented and I sketched her portrait. Her gentle attentiveness inspired me to create, and it was then that I felt that knitting together of soul that endures despite distance and the eroding effects of time. 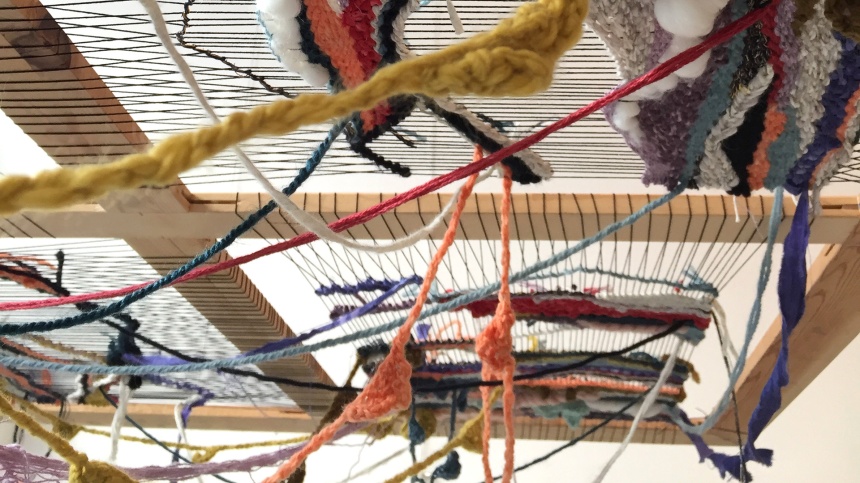 Months later, standing in a gallery that is a perfect blank canvas of a space, I look up to gaze at a weaving she made. It’s suspended from the ceiling, so that dangling loose threads create a sculptural dimension not usually associated with weaving. A natural wooden frame is divided by two cross bars creating four looms on which are tied four weavings grouped as if in community with one another. Purple, yellow ocher, sky blue, blood red, black, and pillows of lofty white yarn are woven in and out of each loom. The threads connect the weavings to one another so that together they make a whole.

This is a portrait of our lives. Looking at this weaving, I can see so clearly how our lives are woven together. This textured, tactile portrait represents the way that the people who become part of the fabric of my life, may one day weave into the fabric of your life, their presence knitting us together in a work that is bigger than either of us individually.

Life as a Thread

The idea that life is like a thread is by no means new. Its origin has ancient roots in the old stories—in myth and legend. In Greek mythology three sisters—The Moirai, or Fates—worked as a collective of weavers. Clotho spun the thread of life, while Lachesis measured its length, and Atropos determined the end of each thread, snipping it off in the end with her gleaming shears.

Jeremiah, often called “the weeping prophet” because of the streams of tears he shed during the tumultuous times in which he delivered messages, also thought of life as a fragile thread. He foresaw impending doom, cautioning the rich and complacent inhabitants of Babylon, saying, you who “dwell by many waters, rich in treasures, your end has come; the thread of your life is cut.”

But even when a thread is cut, it still remains part of the fabric of the lives into which it was woven. You can cut off a life, but the impact it had for good or for ill isn’t erased by its ending. The color and texture of the thread remain part of those into whose lives it was integrated.

In Leah’s weaving there are lots of tangled threads. Some people weave into our lives like a spring morning, calm and bright. Others hover in us like an overcast steel winter sky heavy with snow clouds. Most people are spun of mottled thread, alternating dark and light shades. Their presence can feel like an unexpected downpour on a summer afternoon, or the rainbow that surprises afterwards. But in the end, the fabric of our lives is enriched by all these shades, the whole range of colors of human experience and relationship. Even difficult experiences and strained relationships lend depth to our identity and character.

When I imagine the color of Leah’s thread in my life, she first comes to mind as an opalescent pale sky blue. Her presence has a glow like the luminescent sheen of the smooth inside of a shell. Her thread in my life is the color of joy, because that is the emotion her presence mostly summons in me. But underneath the luminous blue are richer shades of plum, like the warm purple of twilight just after sunset, or the fields of color Mark Rothko painted on the canvases lining the walls of a chapel in Houston. This shade signifies spiritual depth, and also the openness to feel the weight of the pain of loss while being lifted by the hope at the heart of faith.

We grew close during the sickness and death of her father—a relationship that was a complicated tangle of threads—but the dominant impression I have of her through that hard, dark season, is of a woman sustained by supernatural joy in the midst of deep grief.

The Fabric of Being

We cannot escape the reality that our identity—the fabric of our being—is very much made up by those who are woven into our lives. And many of the threads knit into us are not those we choose, but those that are given.

One of the great breakthroughs in epistemology—the study of knowledge—in the last 50 or so years has been the recognition that there are no individual autonomous thinkers. Everything we know and are able to learn is informed by a vast web of relationships, a tangle of threads, into which we are inextricably woven. We are not capable of learning to think outside of the community that nurtures us to social, emotional and intellectual maturity. At least, that’s mostly what I took away from reading Michael Polanyi’s Personal Knowledge a few years ago. And he’s not the only philosopher who’s been meditating on the significance of relational ties for the way we think.

It’s not just in philosophy that the threads of relationship matter. Physicists have theorized that strings may be foundational to understanding the forces of nature and existence too. “At the heart of string theory,” explains astrophysicist Ethan Siegal, “is the thread of an idea that’s run through physics for centuries, that at some fundamental level, all the different forces, particles, interactions and manifestations of reality are tied together as part of the same framework.”

All the forces and interactions of reality are tied together says the physicist. That sounds right. String theory attempts to bind together seemingly unrelated phenomena like gravity, electromagnetism, and light waves in a way that reminds me of Leah’s weaving in and out of different looms as an attempt to bind together the warp of disparate lives. And it makes sense to me that the natural universe of matter would operate under the same general principles that animate the human relational universe. It especially makes sense if the Weaver who wove together the strings of nature also weaves together the strings of our hearts. 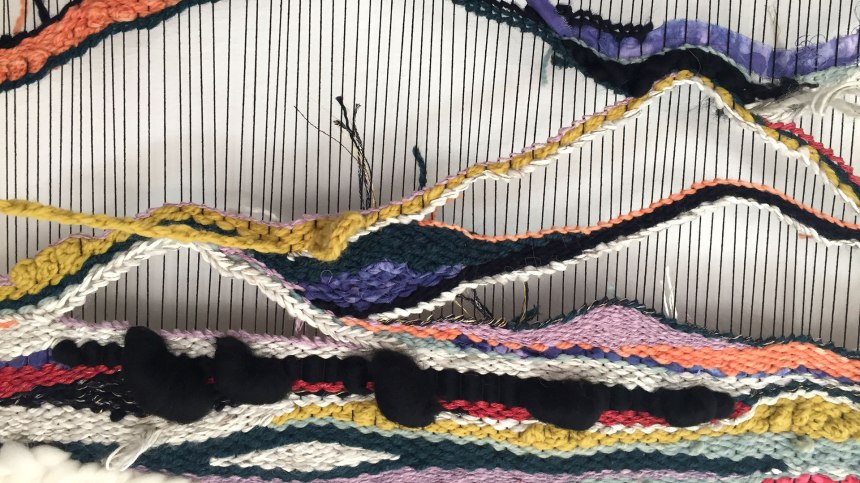 When I look at Leah’s weaving, I see truth not just in the beauty, but also in the mess. Leah’s piece isn’t composed of a perfect, uninterrupted pattern. There are gaps and tangles and knots. And we all know that life is often more tangle than discernible pattern. But the tangles lend texture and in the end the beauty of the resulting abstract forms surpasses the beauty of a predictable pattern.

In the Faraway Nearby, Rebecca Solnit describes the last piece of art her friend Ann created before cancer cut the thread of her life. She says that Ann made, “a vast wall map of white plaster topographical reliefs of islands. Each island was connected by fine red string reaching out to other islands, like flight routes for planes or birds or neural pathways or blood vessels.”

The apostle Paul prayed that the believers in the church in Colossae would be “knit together in love, to reach all the riches of full assurance of understanding and the knowledge of God’s mystery, which is Christ.” This knitting of our souls together, this weaving together of the body of believers, suggests Paul, is what enables us to grasp the mystery of God. We cannot understand the fullness of the mystery of Christ outside the community of faith.

We are not autonomous believers cut off from one another. We aren’t individual spools of thread all lined up on a shelf somewhere. Instead, we’re woven into the fabric of family because our souls are knit together in love.

A couple days ago my friend Leah, like her weaving hung from the ceiling, was suspended in the air. She was flying with her husband Toby over the vast Atlantic, traveling from one continent to another. But the threads of their lives are still woven into ours. And although they will soon be weaving into others, the threads they left behind are a part of who we are. And I have faith they’ll weave into the weft of our lives again eventually; because the God who is Maker—potter, gardener, weaver—knit us together as family, and this fabric endures.

“May the Lord lead you with cords of kindness, and ties of love.”

2 replies to When Weaving Becomes a Lens for Seeing Life